By Tanya Agrawal and Ashutosh Pandey

(Reuters) – Shares of high-end luggage maker Tumi Holdings Incsoared in their market debut as investors bet on a recovery in tourism and continued spending by its wealthy clients.

Tumi’s strong start as a public company mirrors the impressive stock market debut of luxury brand Michael Kors Holdings Ltd, whose stock has more than doubled in value since it started trading on December 15.

The luxury goods industry has been performing well despite economic uncertainty around the world. Strong growth in emerging markets and the tendency of increasingly affluent Asian shoppers to buy luxury goods when on vacation have also boosted sales.

The maker of luggage, business cases and handbags is benefiting from a resurgence in the travel industry, which had suffered after the September 11 attacks on the United States.

“Tumi’s use of e-commerce and social commerce to sell their products is where we’ll really see the growth story.”

The IPO allowed British private equity firm Doughty Hanson to reduce its stake in the luxury bags maker to about 60.7 percent.

Doughty Hanson, which previously owned 84.3 percent of Tumi’s stock, is also an investor in Netherlands-based maker of activated carbon, Norit NV, which has filed to go public in the United States.

Tumi competes directly with the world’s biggest luggage maker, Samsonite International SA, which tried to buy the company early this year, according to media reports.

Other competitors include Burberry, Dunhill, Gucci, Louis Vuitton and Montblanc.

“The company caters to an elite clientele, who can afford up to $2,000 individual luggage … the company will only grow,” said Scott Sweet, senior managing partner at IPO Boutique.

Tumi has retail stores at premium retail venues across the globe including New York, Paris, London, Rome, Tokyo, Moscow and Milan and plans to open eight to 16 stores over the next three years.

Goldman Sachs, JPMorgan and Credit Suisse were the main underwriters of the offering.

Shares of the South Plainfield, New Jersey-based company closed up 47 percent at $26.50 on the New York Stock Exchange on Thursday.

(Reporting by Tanya Agrawal and Ashutosh Pandey in Bangalore; Editing by Supriya Kurane and Viraj Nair) 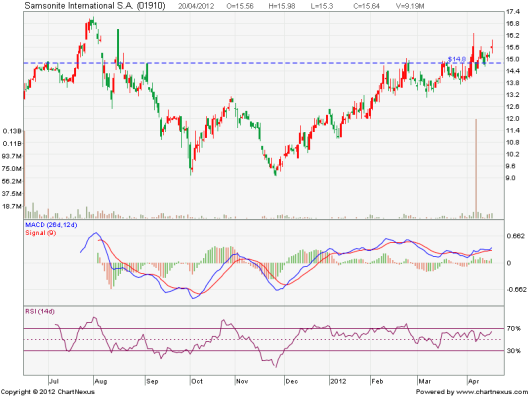